I used to carry a lot of tech crap. I pared it down but still struggled. Eventually, I bought the Toolcase XL and had enough space, but still … something wasn't right. After I saw that a teammate was doing his entire week of travel out of a Minaal Daily Bag I decided I would too. That meant going back to the original toolcase.

I had to embrace the philosophy of minimalism that this tool case, and the entire system encompasses. I asked myself, "What do I really need for the week?" Then I arrived at my system, and have been happier ever since. Here's what I carry in my Toolcase: 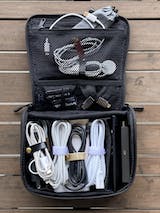 Nice haptic, flawless stitching and very useful details! This little helper is fun to use and stay a little more organized :)

Well made and designed. Very sturdy

• Can be used to store and organize your electronics, cosmetics, toiletries or other small personal items

• Fits inside the Carry-on, Daily, and Rolltop

We offer a lifetime guarantee against all manufacturing defects. If your gear has a defect, we’ll organise a repair or send you a replacement – anywhere in the world.

All our gear comes with a lifetime warranty.

We call it the Kauri Guarantee – inspired by the enormous, venerable tree of that name found in New Zealand.